Pick Up A Weirdo - My first day in London

The date is 6 of August of 2012, London is booming with excitement for the Olympics but that is not what has brought me and my brother here. I clutch to my pillow tight, I had refused to move countries and leave my bedroom behind without it. Part of me wants to scream to my brother how excited I am, how I am finally fulfilling that thing I set my mind to do when I was 11 or 12 years old and everyone just thought I was a foolish dreamer. I’m moving to London.

But another part of me is terrified. I am only 20 years old and living at home with my family is all I’ve known my entire life. It had been my life. The thing that had brought me an enormous pain but a tremendous happiness. Maybe my levels of happiness hadn’t been top of the chart on these last few months but my friends – even if scarce in numbers, were the people I held most truly at heart – they had been my safe haven in moments of need, and my family the people that gave me strength to get out of bed. How was I gonna manage without them? What the hell was I thinking?

My brother and I stand with one huge travel luggage and a hand luggage each, while my cousin – the person who went to pick me up from the airport and it will soon become one of my five house mates – recounts the newest episodes of moving houses and tells us how one of our dear mates had just fallen off what will be known in our house as possessed-by-a-ghost stairs. I listen with excitement while I forget to pay attention to my surroundings and keep bumping into people and forgetting that I should now start apologising in English instead of Portuguese.

When we get to the house, a poor Tânia climbs down the stairs with a painful look, she has not slept properly in regards of being in the hospital after falling down the ghost-possessed-stairs. A cheerful Vanessa greets me heatedly and tells me that she has baked a cake to congratulate my arrival. Later on, she discovers that I’d practised martial arts whilst in Portugal and asks me to teach her so she can beat up one of her friends. I half-heartedly promised, happy for her enthusiasm but feeling slightly nervous: I’m not used to that kind of energy.

We all climb up the stairs again to see the bedrooms and make a final decision of who gets what. The condition is: I either share a bedroom with Vanessa, and use the fourth tiny bedroom as storage or I will have to live in the tiny bedroom. The decision is not even hard: I will always choose isolation, a little piece of my own where I can run to whenever the world outsides starts becoming too loud. Besides I have already heard rumours about Vanessa’s tidiness and sleeping habits. Two years later we will sleep many nights together in her bedroom but this one is a decision I will never regret because although I have changed a lot, I still treasure that little piece of my own space.

Later in the day, when Tânia and Vanessa have fallen asleep while we were all talking in what was now Vanessa’s bedroom, Renato shows up. He is cordial and nice but does not possess the same enthusiasm the others have about me, to him I’m not the new pet in the zoo. He asks me about my pet peeves, if there is anything I absolutely go mental when someone else keeps on repeating. I can’t remember at the top of my head but my brother helps me out.

“Leaving the toilet seat up,” he says, to which I nod in agreement. Renato promises me I don’t have to worry.

By this time I should probably have mentioned that my brother went move in with me. He has come here with the sole purpose of helping me move in. “I came here to work,” he stated once, talking about the fact that he had come to London to help me carry bags, buy furniture, assemble it and paint my room.

This is a complete new chapter that I must start on my own.

He spends a week with me in London where we see the sights and do all he was supposed to, except paint my room; I will do that later with my cousin. On his last day the truth of it all starts gnawing on me like a razor blade and that is why I move the mattress that was in the bedroom next to mine into my own, by bed is already assembled but there is no way I’m gonna sleep alone tonight, I want to feel that the last piece of is still sleeping in the same room as me one last time.

The next day we wake up to take him to the airport, only to find out that the place is chaotic because the Olympics have just finished the day before and everyone is trying to get home. We, me and my cousin, end up leaving him there although he has no guarantees of getting a seat in the plane, but he will eventually get home I know. Back home I try everything to keep myself busy; I don’t want to face this reality just yet. I see Big Fish with my cousin for the very first time and when it finishes it’s time to go back to my empty room.


I’m 20 years old, in a more open and diverse country than my own but at that moment all I want is my mum to be next to me. 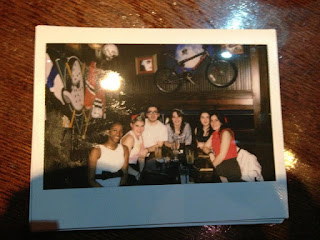